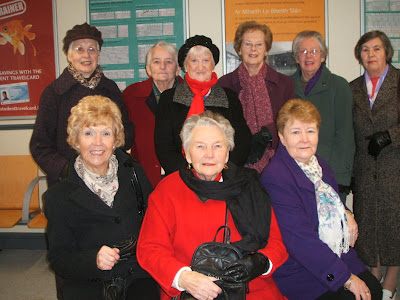 Our first trip away in 2011 took us to The Olympia Theatre, Dublin. On Saturday 29th January a group of our BARA members went to Dublin to see the well-known play by John B. Keane, “The Field”.
It was a very good production but in some respects was different to the famous film of 1990 which had Richard Harris in his memorable performance as the 'Bull' McCabe. In particular the brutality of the murder of the Englishman isn’t emphasised as much. Although the murder remains the focal point of the play, the producer tones down the murder committed by adding more to the comedy in the play.
“The Field” is very entertaining with plenty of funny moments. The play though still remains true to its somewhat dark depiction of life in rural Ireland in the Fifties. The 'Bull' McCabe, played by the American actor Brian Dennehy, is a tenant farmer with a ferocious temper and is obsessed with the field he has been renting from a poor widow. He tells of the 3 acres of rocky coastland that has been turned into rich pasture through his toil and hard work. When the widow decides to put the land up for auction, the 'Bull' McCabe is outraged and decides to murder the buyer, an Englishman. The Bull and his son Tadgh beat the Englishman to death and still though it is quite interesting to see him say an Act of Contrition into his victim’s ear. Thereafter he bullies the townspeople into remaining silent. Not even the Church can break their silence. The loyal town drunk, 'Bird' O'Donnell is well-portrayed, also Dandy and Mrs. McCabe. Bosco Hogan plays the Bishop and Malcolm Adams the Priest.
The 'Bull', at the end of the play, closes the scene by saying that all will forget this in the passing of time but adds, almost grudgingly, except he himself, so you get another insight into his criminal act.
The whole play was thoroughly enjoyed by all and we came away not feeling too gloomy after this horrible murder.