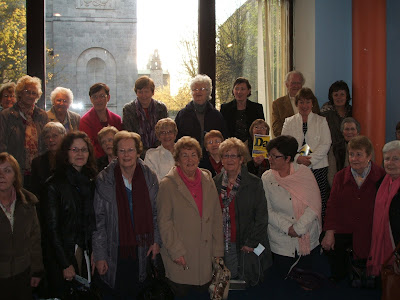 Last night April 11th 2012 we attended the Town Hall Theatre, Galway to see the award- winning play “Da”. This is Hugh Leonard’s most well-known play and reflects many aspects of his own life. Set in Dublin in the 1960s it explores the father – son relationship in a poignant and funny portrayal. The play sees the return to Dalkey of Charlie from London on the sad occasion of his adoptive Da’s funeral. While sorting out all of Da’s things in his old home, his Da’s ghost appears and refuses to leave or stop talking to him. He is reminded of all his past, of his Mam and of the many tender and wonderful periods of his life with his Da. We all can see our own Da in this play. There is a special tender moment when Charlie discovers that Da has saved all the money sent to him by Charlie intended for Da’s own use but which Da has put away into a bank account for Charlie. This play has tears and laughter and has won many awards. The Galway cast were outstanding. Michael Rooney played the lead and the whole production was directed by our own BARA member, the very capable John Boland. I could see this play over and over again. Bridie Loughman