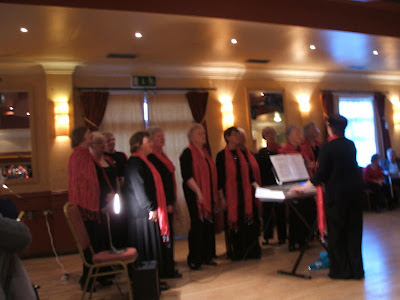 BEALTAINE FESTIVAL 2010
The Ballinasloe Active Retirement Association held its Bealtaine Festival in Gullane's Hotel on Friday, May 14th. Bealtaine is the national arts festival celebrating creativity in older age. The overall theme of the festival for 2010 is 'Have dreams and speak them without fear'.
A large number of members were in attendance. Master of Ceremonies was well-know local actor John Boland, who treated the audience to a delightful recitation of “The Village Schoolmaster” by Oliver Goldsmith. A wonderful night of music and song was provided by the Active Retirement’s own BARA Singers, ably assisted by visiting choirs from Athlone and Portumna. Musical director for the night was Marie Power. The audience sang along to some of the beautiful airs, with a few even performing solo as well.
The winners of the Bealtaine photo competition were Daphne Kenny and Eileen Kelly. A lovely exhibition of art by members of the art group was on display, as well as an exhibition of knitting by the knitting group who donate their work to an orphanage in Belarus. There was also a large display of photos of past events and places visited by the Active Retirement Association.
The Chairperson, Gabriel Rohan, worked tirelessly to make this festival a huge success.
Bridie Loughman, PRO