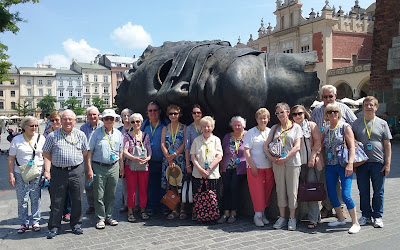 On the 3rd June, 2019 – 23 members of the Ballinasloe Active Retired Group, travelled to Cracow, on a memorable trip to the beautiful historic City of Cracow. Poland’s royal city, its capital from the 11th century, until 1795. We had a pleasant flight and arrived at our Hotel in the late evening., and soon settled in to our new surroundings.

We were blessed with beautiful sunny weather, with temperatures of 28/29 degrees for the whole of our visit. Our Tour Guides had arranged for us to visit different places each day and gave us much information about each site we visited, including the following:-

The famous Salt mines of Wieliczka. Where much of Cracow;s wealth was built on the ‘white gold’. We had a guided tour of the mines, which included 3 hours of walking, taking in 300 steps of stairs, underground, which had to be manouvered in the process, this was quite a challenge for each of us, but we all managed it. We also saw the beautiful Church in the Mines , which was most interesting, with a beautiful monument to St. John Paul 11.

A walking tour of Cracow, which took us on a visit the main square in the City, with its beautiful historic buildings, the Jewish Quarter, with its 9 synagogues, which were never destroyed by the Nazis, and which is now slowly coming back to life. We also saw Cracow’s university which was founded in 1364. In our travels, we also saw where St. Pope John Paul lived, and our Guide gave us the whole history of his life in Poland. To this day he is very much revered by the Polish people . A guided tour of the Cathedrals was also included in our itinerary, where we saw the picture of St. Faustina, Apostle of Divine Mercy, beside a portrait of St. John Paul, in a prominent place.


A visit to the Jewish Museum in Galicia, was also organized, which was very interesting.


We travelled to Auschwitz & Birkenau, where so many Jews were brutally murdered in the war. With our guide, we saw the places where mainly the jews, but also Poles, Gypsies, and other inferior’ groups. lived, worked, and in so many cases died as a result of the treatment they received. One prisoner, A Franciscan Priests, Fr. Maximillan Kolbe, who offered his life for another prisoner who had a wife and family, died in Cell No. 18, from slow starvation. The visit to this place was quite painful and thought provoking, and very sad that such a terrible thing could happen in our lifetime.


On our last day in Cracow, we re-visited many of the places, some of us took a bus tour of the City, and enjoyed the beautiful sunshine and the surroundings. It was with sad hearts that we said good-bye to the lovely Polish people and their beautiful Country, and who knows, maybe we may have the privilege of travelling there again in the future. 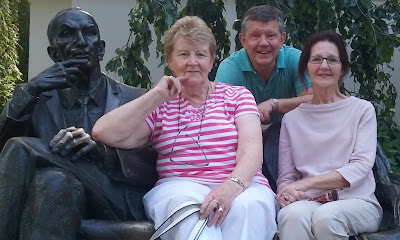