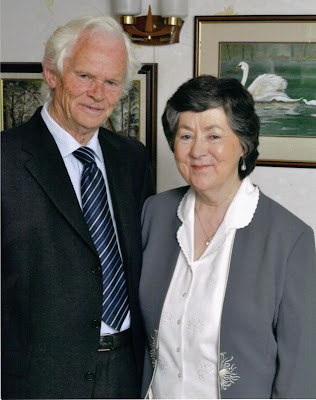 Trip to Cong
On Wed. 14th July’10, 47 members of the Ballinasloe Active Retirement Association had a very pleasant trip to Cong. We started off by bus from St.Michael’s square at 8.30 a.m.. The weather forecast was bad, but we needn’t have worried as we managed during the day to escape most of the showers.
We drove to the pretty village of Cong and from there we took a boat up the Corrib. Our Captain gave us an entertaining talk as we passed various islands. He told us that many years ago the Corrib was a busy trading area, boats plying up the full length to the City of Galway. He also told us about the Canal that never was! A lot of time and money and manpower was spent in digging this canal between the Corrib and Lough Mask. When it was eventually finished, the porous limestone could not hold the water, so the canal had to be abandoned.
After the boat trip, we went to see Ashford Castle and were impressed by it’s size and the beautiful grounds. . Unfortunately we were not residents and were not allowed inside. A few intrepid members of our group peeped in the door, and some more courageous went into the diningroom.
Then we went to Ryan’s Hotel for our lunch. And a very good lunch it was too!
After lunch we were taken on a tour of the sites of the film “The Quiet Man” We had a very witty and entertaining guide who encouraged us to act out parts from the film. This started off with Jimmy Lyons being allocated the part of “the dying man” This character in the film, hearing that a fight had started in the street outside his house forgot about dying, jumped our of bed and ran the length of the street while holding up his trousers!
After getting off to such a good start, we all entered into the spirit of the thing, and enjoyed all the “craic”
We got back to Ballinasloe at 6.15, tired but happy with our day and thankful to Bridie Whelan and Chris O’Flynn for all the hard work of organising the outing. 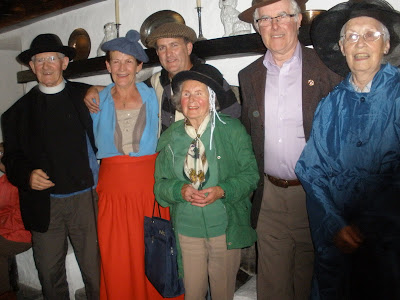 Members try out as extras on the set of "The Quiet Man"
No comments: 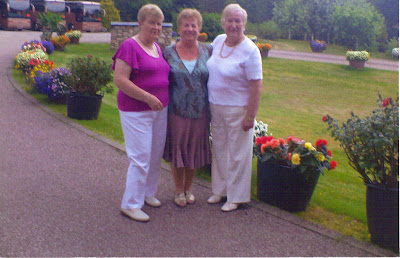 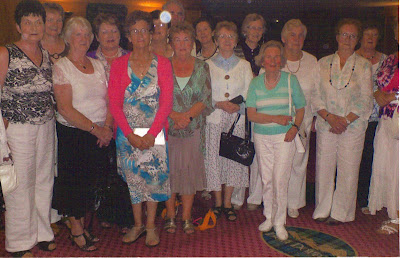 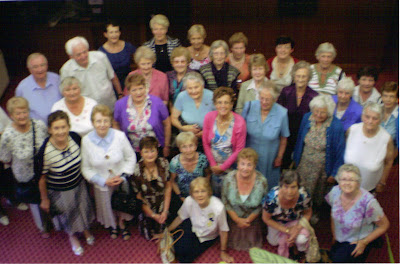 Ballinasloe 3.30 am, fifty-nine of us gathered in the gloom and left by coach for Dublin Airport, arriving at approximately 5 am. From there we travelled to Prestwick where our “Highland Heritage” coach and driver awaited us. On our way north we had some time in the city of Stirling. Some of the party took the opportunity to do shopping and sightseeing; others, suffering from the after-effects of lack of sleep, found quiet corners in which to relax. On then to our hotel in Tyndrum, having viewed “Hamish” on the way. What can we say about our hotel? Situated in a beautiful spot, surrounded by mountains, it was like an oasis after our long journey. We were warmly welcomed by the manager, resplendent in his kilt. He took the opportunity to lay down some simple ground rules - times of meals, nightly entertainment, etc. The hotel was everything we could have wished for with comfortable bedrooms, very good food and nightly entertainment after dinner.

Started wet but by the time we reached Loch Lomand for our cruise the rain had almost ceased. We enjoyed the cruise and after proceeded to Helensburg, a lovely little town on the estuary of the River Clyde. By now the sun had appeared and we had a grand afternoon.

Today saw us head northwest, passing through Rannoch Moor and Glencoe, the latter the sight of the massacre of the McDonalds by the Campbells. Our driver told us that a local hostelry boasts a sign to the effect that no Campbells would be served there! On through Fort William where we stopped briefly, for refreshments and a bit of shopping, before proceeding over the Caledonian Canal, where we saw “Neptune’s Staircase”- a man-made structure, beautiful in its own way. On to the fishing village of Mallaig for lunch and a stroll around this seaside place with a view of nearby islands. Back then, to our hotel, through spectacular scenery.

We travelled southwest to the Isle of Bute, reached from the mainland by a four minute ferry ride. Our bus then took us to Rothesay, the island’s principal town where, after lunch, we had a few hours for sightseeing, in glorious sunshine. We noticed, among other things, a small commemorative plaque to the men of Bute, who, in 1298 left the island to join William Wallace in his fight against the English. None of them survived.


Wednesday:
Our last full day took us west on a short journey to Oban, a very busy port. There was no shortage of restaurants or shops and we had an enjoyable few hours before going south to the Isle of Seil. Here our driver drew our attention to the humpbacked bridge which brought us on to the island. She promised to let us leave the bus on the way back to, as she put it, “walk across the Atlantic”, which we duly did but not before spending some time on the quaint little island. Wednesday night, being our last night, we had a gala dinner at the hotel. Some of us even managed to eat the haggis, a Scottish delicacy, which is much like our own white pudding. This was piped into the dining room with due ceremonial.

Early start this morning, in the rain, which persisted for some time as we went south but, thankfully, had cleared by the time we reached Prestwick. Our flight to Dublin was pleasant. Our coaches met us at the airport and we carried on to the Spa Hotel in Lucan for a very welcome and substantial meal. This had been arranged by our hard working committee. An hour and a half on the coach found us in Ballinasloe at 6 pm, tired, but well content after a great holiday.


It is only fitting before we finish that we should give full credit to the committee who arranged everything so efficiently - they even had enough money left to pay for our meal in Lucan. Well done!