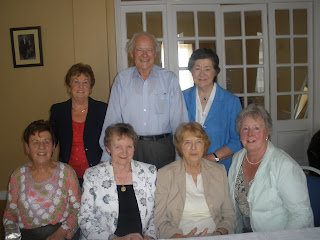 Some B.A.R.A. members who took part in a interview process that may be screened in the near future. This pilot programme hopes to make the younger generations realise the wealth of experience and knowledge that is available at their grandparents door. Seniors from various parts of the country participated in this venture.
No comments: 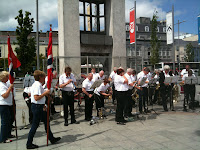 For me, a childhood trip to Galway always conjours up memories of Salthill and that stretch between the Hangar and Blackrock.

Here we parked, unloaded cousins, aunts, assorted parents, baskets of food, flasks of hot tea, large Mi-Wadi bottles of diluted orange and sandwiches which were beginning to turn a Marakesh red due to the bleaching of the tomato and ham filling. For some unknown reason they always tasted of sand! 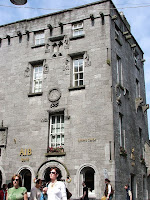 Across the bay we could see the hills of
Clare, which for many years I thought was America, having heard that Boston was the next parish to Galway. We were never allowed to await the sun going down on Galway bay, always on the road home"before the
evening traffic"


The magic of Galway was awakened for 25+ members of Ballinasloe A.R.A. on Tues last as they undertook a guided walk to some of this famous city’s places of interest.Our guide, Fiona Brennan, a Londoner did not speak in “ a language that the stranger did not know” but was as Galway as anyone could wish. 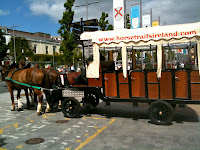 Meeting in Eyre Square after an early morning train journey----thanks again, Charlie Haughey---Fiona began her 90 minute tour by filling us in on some of the history of the square. Markets,
jousting, fights, sieges, Padraig O Connaire, J.K.F., 14 tribes, folk lore, history, celebs and blackguards all had moments of notoriety here.

On Shop St., we join the bronze still figures of Samuel Beckett and his Estonian co-writer, who share a seat and gaze eternally at the models in Brown Thomas window. On to Lynches castle then with its four stories, fireplace from Menlo Castle and a fireman monkey saving a baby from fire. 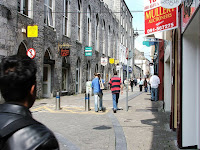 At the old Pro-Cathedral, Fiona reminds us always to look up when in Galway if we wish to catch glimpses of the many fine examples of limestone masonry. At the revamped Augustinian Church, we can also observe Wolfe Tones window over Buttermilk Lane where he wrote much of his revolutionary ideas, and no doubt the odd letter to Mary Martin whom we shall meet later.
The Tabhdhearc was locked, so we walked on to the Spanish Arch---- once four arches but now reduced to 1.5.
The echoes of flamenco dances, clicking castanets, and dark complexions still haunt these open spaces around the Cladagh, between the tidal Corrib and the old Galway port. The famous ring fashioned by a Joyce for an Arab bride has given the place an international fame. 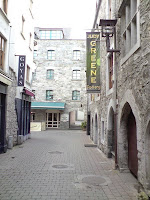 At Kirwin’s Castle and Lane we learn of “Humanity” Dick Martin,
founder of R.S.P.C.A.and his theatre loving wife, also friend of Wolfe Tone.
Here is a Church open all day,a shrine to the Connaught Rangers, Knight Templers, beautiful masonry and stainglass windows.Our final stop was at Lynch’s window, that symbol of over-zealous loyalty to law and order. A good day all told and not a sandy sandwich in sight! The group dispersed to eateries and hostelries, well and widely positioned in this great city.


On to the King’s Head pub next, where a pint will never taste the same again after we learned that the original owners were Cromwellion soldiers who executed a king and stabled their horses in St. Nicholas’ Cathedral! 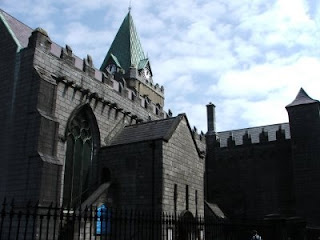 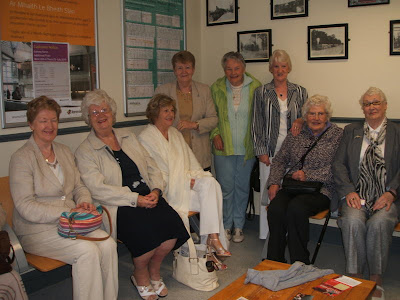 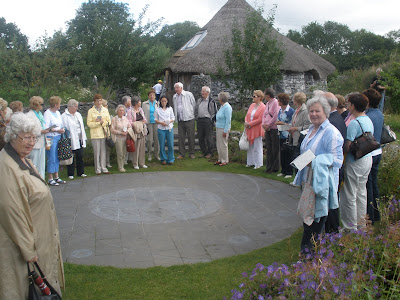 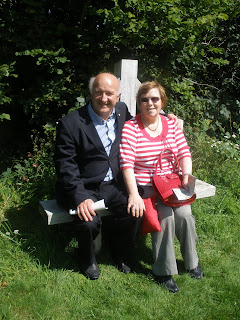 Careful Deirdre the gang are watching. 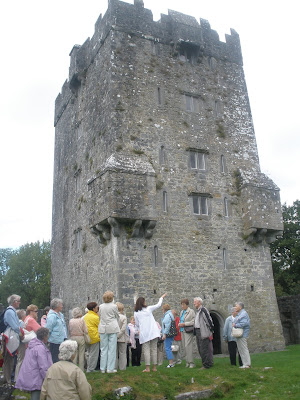 Our visit to St Brigit’s Gardens and Aughnanure Castle


A fine sunny day is what we hoped for as 36 of us boarded our bus headed for Brigit’s Gardens, near Oughterard on 4th Aug. ‘10
As we sped down the motorway, we felt as excited as schoolchildren on our first school outing. As soon as our bus arrived at the Gardens, we were met and welcomed by a very charming tour guide, Sabina. We enjoyed delicious tea, coffee and scones before setting off on our tour of this beautiful, Celtic inspired garden. As you stroll through the garden you explore the cycle of the seasons. Then you emerge onto a nature trail to discover a stone chamber, a crannog and a calendar sun dial. We checked out the hand-crafted basket swings and sat on the 6000 years old bog-oak throne. We refreshed our senses with scents of herbs and wild flowers .
It was a magical experience particularly enjoyed by the keen gardeners in our group who sniffed and admired the wonderful display of wild flowers.
Reluctant to leave these beautiful ,relaxing surroundings, we journeyed on for a visit to Aughnanure Castle which lies in picturesque surroundings close to the shores of Lough Corrib. Here we were again given a very informative guided tour of this Castle built by the O’Flahertys c.1500. The O’Flahertys and the powerful Mayo O’Malleys were joined in the marriage of Donal an Chogaidh O’Flaherty and Grainuaile/Grace O’Malley. The Castle is a particularly well preserved example of an Irish tower house.
We finished off a very full and interesting day in Kelehans Restaurant in Bushy Park. With hearty appetites, we sat down and enjoyed a lovely meal in beautiful surroundings before setting out on our journey home.
It was the last of our Summer day trips for 2010 but a memorable one it was for all of us. 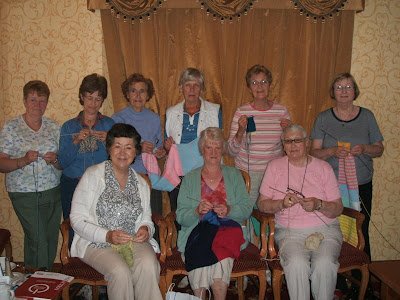 KNITTING GROUP
Photo of members of Ballinasloe Active Retirement Knitting Group supporting Age Action Ireland in their “Innocent Big Knit” campaign
Knit some woolly hats for the Innocent smoothie bottles. For every smoothie bottle with a woolly hat sold, 25 cent will be given to Age Action. They are aiming for 90,000 hats from all over Ireland. By joining in this we will be helping Age Action to protect some of the most vulnerable members of our society this winter.
The money raised will go towards Age Action Ireland’s annual winter warmth public education campaign.