Jimmy Crehan, who passed away recently, was a man of many talents with many interests. He will be particularly missed by the members of the Ballinasloe Active Retirement Association.

Jimmy was elected Chairman of the group at our first meeting in Hayden’s Hotel in March 2002 and remained an active member at both local and national levels , right up to the time of his death. He was an extremely popular, hard-working and enthusiastic chairman and he paid a big part in steering the association from its uncertain beginning to the large, thriving successful group it is to-day.

Even though he was retired from his “day job” he was very aware that retirement – especially for those who live alone- created a huge void in one’s life .He believed that knowledge was freedom, so he fought to bring awareness and information to those in need, especially  Active Retirement members. He organised talks and information sessions on subjects such as heart problems, strokes, blood pressure, Diabetes, Depression and the Psychology of ageing. Huge numbers attended all these talks.

Jimmy was involved in one of our greatest achievements to date including. the making of a Film Documentary entitled “What will we do in the Autumn” (now available in DVD) This was made in conjunction with the Galway Film Festival. He also played his part in a major project entitled “Fado Fado”.as he reminisced on his childhood memories of rural life in Ireland in the 1st half of the 20th century. This was done in collaboration with Brendan Smith from the D.E.R.I Institute at Galway University. Jimmy very proudly accepted a well deserved award on behalf of the Association for this project.

In Jimmy’s own words our members lived in“ the era of the paraffin oil lamp”so it was a big leap forward into the age of technology. With gentle persuasion and encouragement from Jimmy, we gradually became members of the “silver surfers” under the patient tuition of Brendan Smith.

Jimmy’s vast knowledge and experience gained from a lifetime in St. Brigid’s Hospital, he was instrumental in compiling the first, and so far only, history of  St. Brigid’s Hospital. An achievement encouraged by B.A.R.A and an accurate record of one of the largest institutions to be built in Ballinasloe

We will miss Jimmy’s smiling face and sense of humour and thank him for his guidance, wisdom and commitment in all our activities

To his beloved wife, Maureen and lovely family we extend our deepest sympathy.
May he rest in peace. 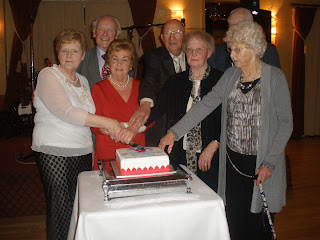 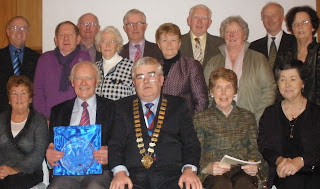 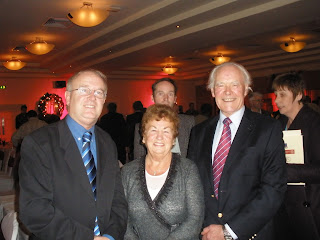